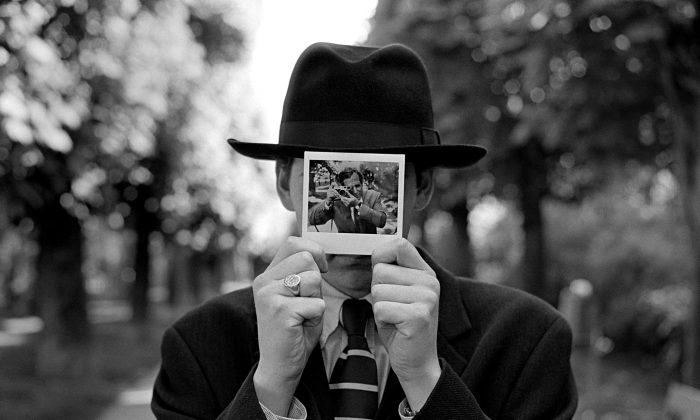 “My interest is not what is new or fashionable but rather what endures and is graceful, stylish and beautiful.” Who is Rodney Smith?

Rodney Smith (1947–2016) was a prominent American photographer. He combined portraiture and landscapes to create enchanted worlds full of subtle contradictions and surprises. Using only film and light, his unretouched, dream-like images were matched by the craft and physical beauty of his prints. Mr. Smith was a man who cared deeply about sharing his vision with humor, optimism and grace, despite all the harshness of the world. Smith passed away in 2016 and his estate continues to exhibit his work at museums and galleries around the world, showcasing his signature aesthetic and playful sense of humor. During her presentation at the Smithsonian, Smolan shared his inspirations and techniques used to create his unforgettable, magical photographs. Smith’s work has long been associated with ‘whimsy’ – aptly described by The New York Times as “a prominent photographer whose whimsical work invited comparisons to that of the Belgian surrealist René Magritte’s.”

Leslie Smolan recounts, “He is like no other photographer. His work embodies a magical combination of style, wit and whimsy. Rodney taps into shared emotional feelings that transcend borders or language – like hope, happiness and curiosity.”

For over 2 decades, Anthony Wilder’s tagline was ‘architecture with whimsy.’ “Although it is no longer our tagline, it is an important part of our company vision,” says Wilder, and is inspired by Bob Goff’s quote,

“Whimsy is that nagging idea that life could be magical, that it could be truly extraordinary, if we were only willing to take a few risks”

– Bob Goff,  A Million Miles in a Thousand Years

The Anthony Wilder vision statement continues, ‘our aim is not simply to create buildings or rooms, but to inspire our clients to live the way they have dreamed of living. We will continually challenge the architecture of routine by introducing innovative and exciting ideas that result in powerful and life-changing designs.’ “That is what ‘architecture with whimsy’ means to us,” says Anthony.

Elizabeth Wilder explains “Rodney Smith and Anthony Wilder Design/Build are bound by a common appreciation of whimsy –however we may define it.  I have long been drawn to one of my favorite Rodney Smith images,” says Elizabeth, “the woman on the plane in the orange dress … it speaks to me… it is what whimsy looks like.” “Rodney Smith’s photography draws the viewer into an extraordinary world: a bygone era that is darkly romantic, whimsical yet ironic, surreal yet classically beautiful.” My Modern Met covered the DC debut in the article, The Legacy of Whimsical Photographer Rodney Smith Continues to Grow. “Nearly two years after his untimely passing, Smith’s wife and creative partner Leslie Smolan continues to educate the public about his life and work.

‘The great irony about Rodney is that his pictures look the exact opposite of how he felt,’ Smolan recounted. ‘They’re bold and confident, beautiful and graceful, whimsical and funny, while in reality, Rodney was often lonely, anxious and fearful. Photography was an emotional outlet—a way for him to channel his anxiety and express himself.’

So great was this creative desire that he left behind an astounding body of work that stretches from 1970 until 2016—200,000 negatives, 18,000 contact sheets, and 8000 images printed. Meticulous in his work, he remained faithful to film, never transitioning to digital. Smolan reminds us, ‘he always shot on location with natural light, and none of his images are retouched, despite how fantastical many of them look.'” “His photographs tease one to question, to wonder, to feel delight in a moment captured. Even when we are overloaded with images, his photographs are unforgettable.” Leslie Smolan, now the executive director of the Rodney Smith Estate, is also the founder of Carbone Smolan Agency, a world-renowned branding and design firm based in New York City.

“My objective is to expand and enhance the legacy of Rodney Smith, the photographer, the person, and my late husband. Rodney had a singular view of the world as a place of magic, delight, beauty and whimsy. I want to introduce his art to those who aren’t familiar, and share his story with the world.”

Learn more about Rodney Smith, and the story behind the artist, in a rare behind the scenes video by Safi Majid: Watch here.

To learn more about the DC debut of Rodney Smith’s work, read posts by K Street Magazine and Hollywood on the Potomac.