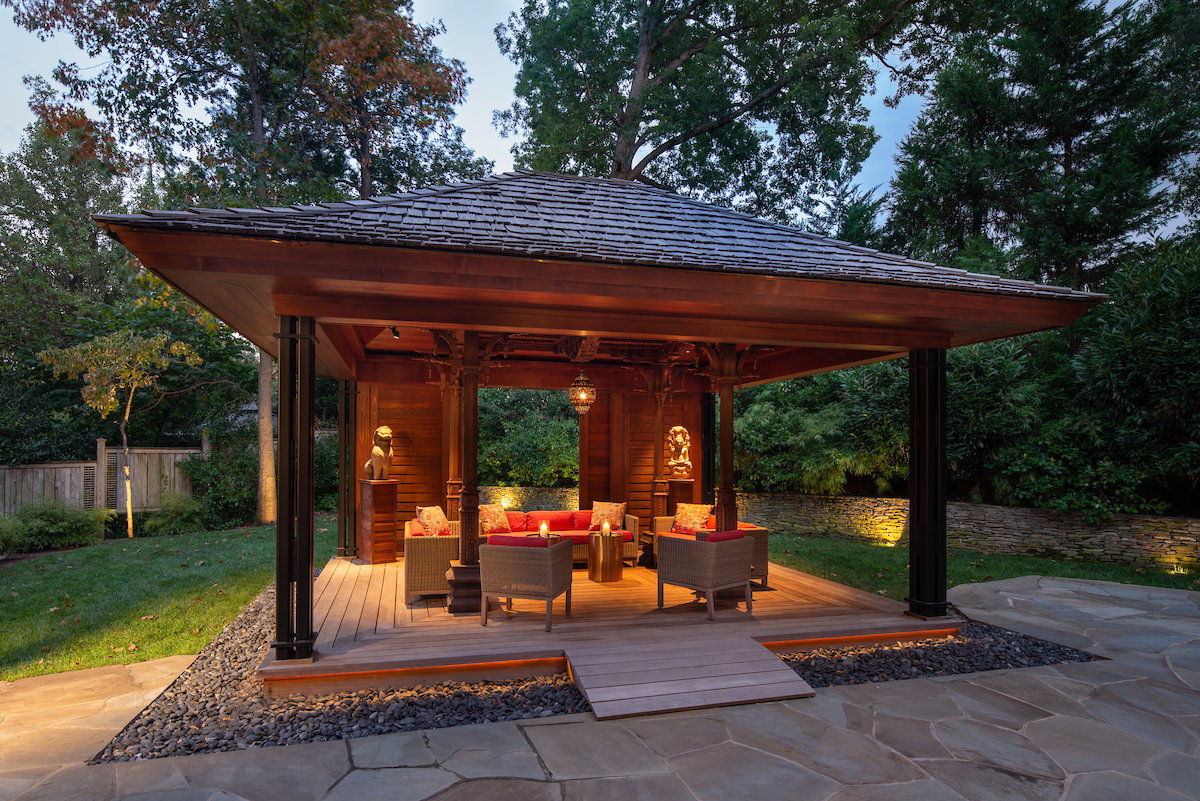 Outdoor Living: Spirit in the Structure of an Antique Joglo

A Custom Pavilion to Protect an Ancient Joglo

When Anthony Wilder, founder of Anthony Wilder Design/Build, and his team – Architect, Sean Mullin, AIA and Master Craftsman, Mark Masser of Anthony Wilder’s home improvements division, Wilderworks – got together to collaborate on the design of a pavilion to encase a joglo for a Virginia family, the magic happened.

A joglo is a type of traditional Javanese house found throughout Indonesia. With an elevated floor, unlike modern structures which are bound together with nails, brackets and adhesives, joglos are fit together like giant jigsaw puzzles without any nails or screws. “This space is an immediate mood changer,” says Wilder.

The idea first came about when Arlington homeowners, Tom and Sonya Ricketts, found and purchased an antique joglo at Arhaus and called on Anthony Wilder to figure out how to install it in their yard, while also protecting the carvings, sweeping roofs, and intricate details. “We were fortunate to have a long-term client call on us to reconstruct this 500-year-old joglo at his home,” adds Wilder.

The yard had to be leveled before beginning to build the surrounding pavilion. The pavilion includes steel columns, a cedar roof, teak flooring, cedar barn doors, Moroccan-style lighting, and a seating area that not only protects the joglo, but also enhances it. “Reflective black beach pebbles create a moat around it, while landscape lighting illuminates the entire space, giving it a Japanese teahouse feel” says Wilder. The Zen pavilion complements its natural surroundings and is used often by the owners for entertaining and relaxing.

The joglo, which includes thousands of pieces of wood, had to be disassembled to transport to the house and then reassembled by the Wilder team. This led to one of Mark Masser’s more memorable moments in construction.  Masser recalls, “when we disassembled the structure at the store, we discovered antique Javanese carvings – which may as well have been hieroglyphics to us—so we numbered each piece to identify which parts belonged together before we transported it to the home in Arlington. Once we began to reassemble the joglo, we noticed that it had not been pieced together correctly by the store. So, we began the long, and interesting, process of matching the ancient carvings to one another to reconstruct it properly.”

“Our team lived and breathed this magnificent, hand-carved joglo while working on this project,” Wilder says. “It was an amazing experience for all of us.”

The homeowner, Tom Ricketts, recalls “most design and architecture firms are fairly formulaic, if not one dimensional, sometimes forcing their designs on you.  Not the Wilder team.  We found them to be highly receptive to our ideas and concepts, but providing the leadership and vision to translate those initial ideas into truly amazing designs that will work and be on budget.  We liked that they could take our ideas and transform them, make them both practical and beautiful.  Their willingness to incorporate our ideas in every room meant that much of the house feels highly personal, and that makes a huge difference.”