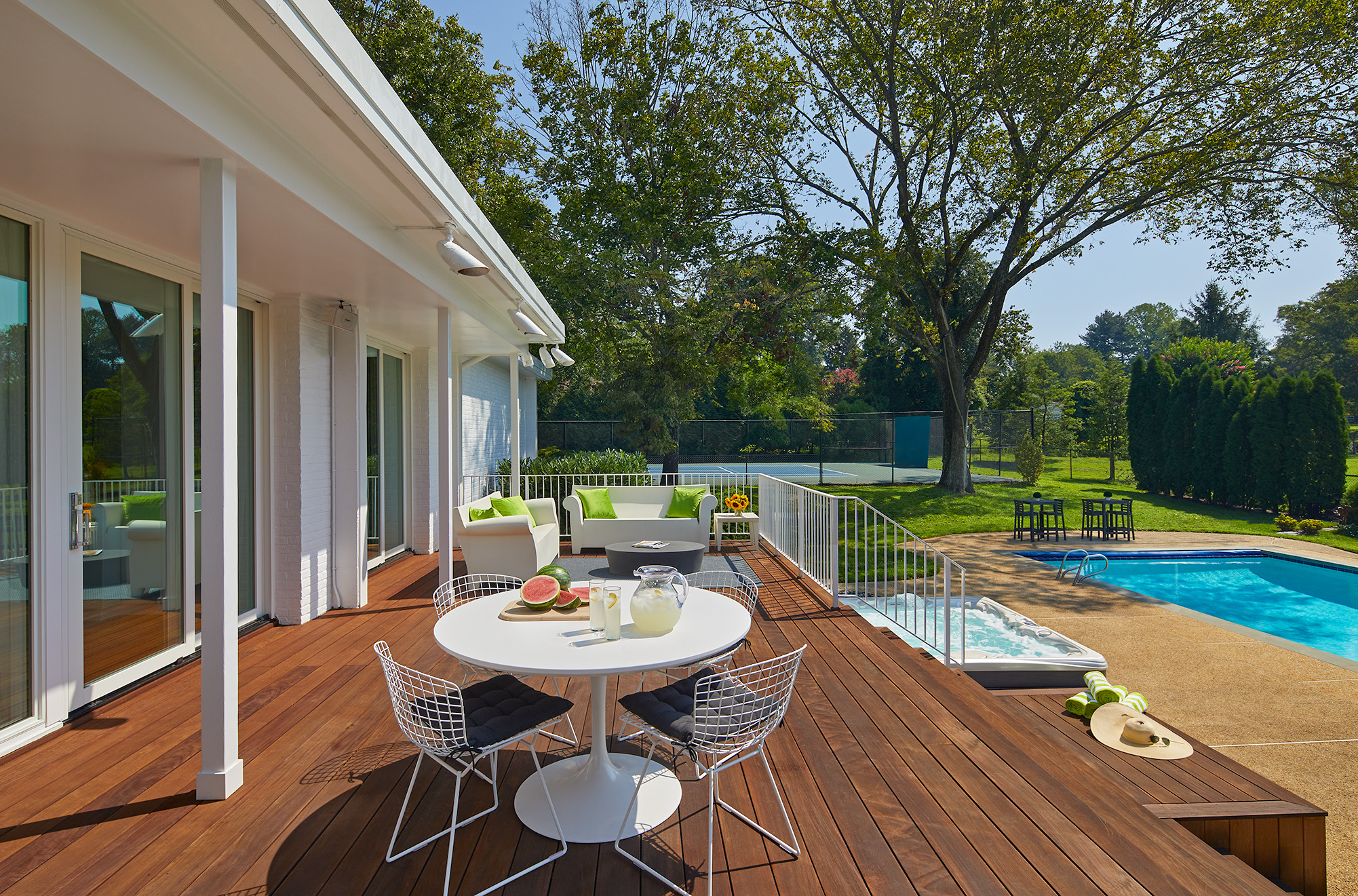 Inside A Designer’s Home

Anthony Wilder Design/Build’s Founder and Lead Architectural Designer, Anthony Wilder, and President, Elizabeth Wilder, decided to renovate their own home during the pandemic.

Elizabeth recalls, “We always had plans to remodel, but finally started at the beginning of the pandemic in 2020 because we were concerned about CoVID’s potential effects on our company. Back then, it was an complete unknown. Essentially, we were concerned our construction crews might not have enough work. Once the project began to take shape, Anthony and I found ourselves wondering why we waited so long to renovate.”

The home’s unique mid-century modern design was one of the reasons the Wilders were attracted to the property in the first place. “We were immediately drawn to the house because of the beautiful quality of light throughout, the simple one-story atrium layout, as well as the pool and tennis court,” says Anthony Wilder.

After purchasing the Bethesda home in 2013, the Wilders initially made a few exterior improvements including painting the house white. Passionate about landscape design, Anthony upgraded the landscaping around the property; the sweeping green landscape now includes a Japanese Lace-Leaf Red Maple tree (in the center of the circular driveway) that the Wilders transported from their former home in Bethesda, as well as manicured boxwoods and tall trees for privacy.

The renovation allowed the Wilders to showcase the multi-faceted talents of their high-end Bethesda design/build firm as they planned the interior remodel that would stay within the original footprint of the home originally designed by Grosvenor Chapman in 1963.

Recently featured in Home & Design Magazine, Linda Hales writes of the original design, “Chapman drew a hollow square with a courtyard at its center. The house faces north, but doors and windows—many floor-to-ceiling—open to the landscape on all sides. The center atrium pours light into the interiors. Public rooms are grouped around the north, west and south sides, while sleeping quarters—the owners’ suite plus two bedrooms and baths—occupy the eastern side. A lower level includes another bedroom and bath.”

The renovation has changed the way the Wilders live. “With its flat roof and boxy form, the outer structure changed little from its mid-century origins. But inside, a major renovation refreshed the design, chiefly converting single-purpose rooms into a larger, multi-functional spaces while respecting the footprint and integrity of the original design.” –Home & Design Magazine

One of the first considerations when beginning the design was whether or not to remove the wall between the kitchen and dining room. The dining room, which is centrally located on the main floor, often sat vacant and rarely used. “We wanted our home to work for our lifestyle –we appreciate that the house easily lends itself to aging in place, but now, it also works for our entire family including our 2 sons, their wives and three grandchildren” says Anthony.

“Having a space where everyone can gather was a huge factor in our decision to renovate.”

While the new dining room and existing music room offer more formal gathering areas, the remodeled kitchen serves as the hub of the home. The center, square island accommodates seating on three sides and is wrapped in marble with a sealed finish to eliminate the risk of stains. Clean and crisp, the white-on-white kitchen represents the modern minimalism that the Wilders are drawn to, while respecting the home’s original aesthetic.

As the lead architectural designer on the renovation, Maria Fanjul took her cues from Anthony and Elizabeth, while interjecting what she felt was the right direction for the project. Maria wanted to create more transparency between spaces on the main floor so when in the kitchen, you could see the central outdoor courtyard that is a focal point of the home’s original modern design.

“The lines of the cabinets were kept clean and simple,” says Shannon Kadwell, Anthony Wilder Kitchen & Bath Designer. In addition, Maria, Shannon, Anthony and Elizabeth embarked on an extensive search for the right slab of marble for not only the island, but also for the perimeter countertops and backsplash. “We selected a stunning slab of Calacatta Lincoln marble,” says Kadwell.

The kitchen now speaks to the family’s lifestyle, and the Wilders love entertaining their sons (and their growing families), Micah and Ari Wilder, owners and operators of Zeppelin and Chaplin’s restaurants in Washington, DC.

In the family room, minimalist custom cabinetry surrounds the TV and was designed to conceal everything from cables and electronics to pet supplies for their three dogs. Two bathrooms were also renovated, and the Wilders have future plans to remodel their primary bathroom.

“It’s an emotional undertaking when renovating your own home. I definitely have even more empathy for clients making these tough decisions now that I had to make them for my own home.” -Anthony Wilder

The exterior renovation included relocating the hot tub, reconfiguring and expanding the rear deck and refinishing the tennis courts. “When we purchased the home, we didn’t know how much we would use the tennis court,” said the Wilders who now use it regularly to play both tennis and pickleball.

In the backyard, the hot tub was integrated into the deck area and includes a built-in ‘dock box’ that doubles as storage for pool supplies and offers egress for the hot tub.

The basement features an additional guest room, two bathrooms, extensive storage and access to the two-car garage. Architect, Grosvenor Chapman originally designed the home in the 1960s for client, Herbert William Robinson, a software pioneer. The home also boasts a bomb shelter with a hand-crank air intake, possibly inspired by Robinson’s Cold War assignment identifying strategic bombing targets in the Soviet Union. “We love that there is such an interesting history in this house,” says Elizabeth.